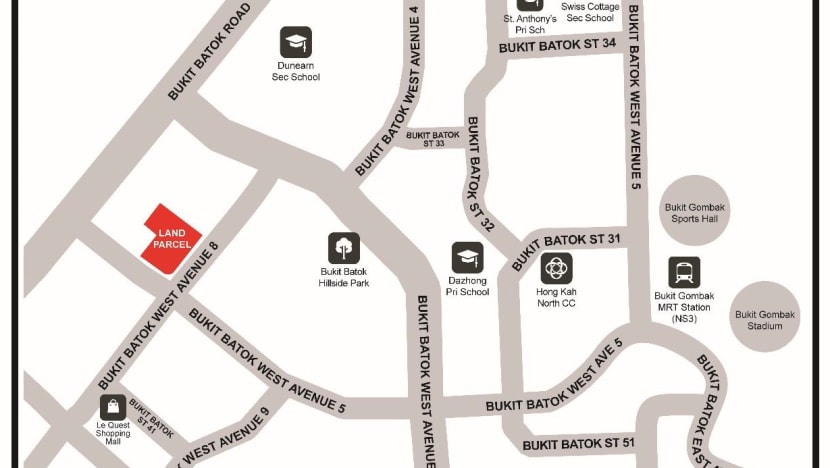 The site has a lease period of 99 years and falls under the Confirmed List in the H2 2021 Government Land Sales programme.

This is the second EC site launched in 2021, after the Tampines Street 62 parcel's tender in April, which closed in July with a fresh price record.

The release of the Bukit Batok site comes a week after the government introduced new property cooling measures and also said it will boost supply in both the private and public housing markets to cater to demand.

The 99-year leasehold site falls under the confirmed list in the H2 2021 government land sales (GLS) programme, HDB said in its press statement on Thursday. Sites on the confirmed list are launched according to schedule, regardless of demand.

Among the new market cooling measures announced on Dec 15 are higher additional buyer's stamp duty (ABSD) rates. Developers now have to fork out an increased ABSD of 35 per cent on a residential land purchase.

PropNex CEO Ismail Gafoor said the Bukit Batok Avenue 8 site may "attract a fairly healthy turnout of bidders", given the diminishing supply of new EC units in the market, as well as developers potentially seeking a less risky development site to add to their land inventory.

"ECs have always been popular among homebuyers owing to their more affordable prices. In addition, ECs tend to appeal to the groups of buyers, such as first-time Singaporean home buyers or HDB (Housing Board) upgraders who are least affected by the new cooling measures," he added. ABSD is fully remitted when acquiring a new EC unit if the buyer is a Singaporean.

Lee Sze Teck, senior director (research) at Huttons Asia, noted that there are a total of 7,788 3-room to 5-room HDB flats completed from 2015 to 2018 which will offer a potential pool of HDB upgraders for the EC project when it is launched for sale in 2023.

The site is located in the suburban area of Bukit Batok where private housing supply is fairly limited. "The new EC project will be popular amongst HDB upgraders in the area looking for a private home within the same estate," Gafoor said. ECs are a private-public housing hybrid.

Lee estimates the site to attract bids of between S$580 and S$630 per square foot per plot ratio (psf ppr), with up to 10 parties bidding.

Still, despite the popularity of ECs among buyers, PropNex expects bids for this site to be moderate, given the lack of amenities in this neighbourhood compared to the Tampines Street 62 EC site, as well as ongoing concerns over rising construction costs among developers.

The Tampines plot set a new record in July 2021, with the top bid coming in at S$422 million or S$659 psf ppr, exceeding the forecast of most property consultants. It also surpassed the earlier record of about S$603 psf ppr set in May 2021 for an EC plot in Tengah Garden Walk, which is near the Bukit Batok site.

The tender for the Bukit Batok West Avenue 8 land parcel will close at 12 pm on Mar 8, 2022, the same day as the tender closing for a residential site at Dairy Farm Walk that was launched by the Urban Redevelopment Authority in October this year.