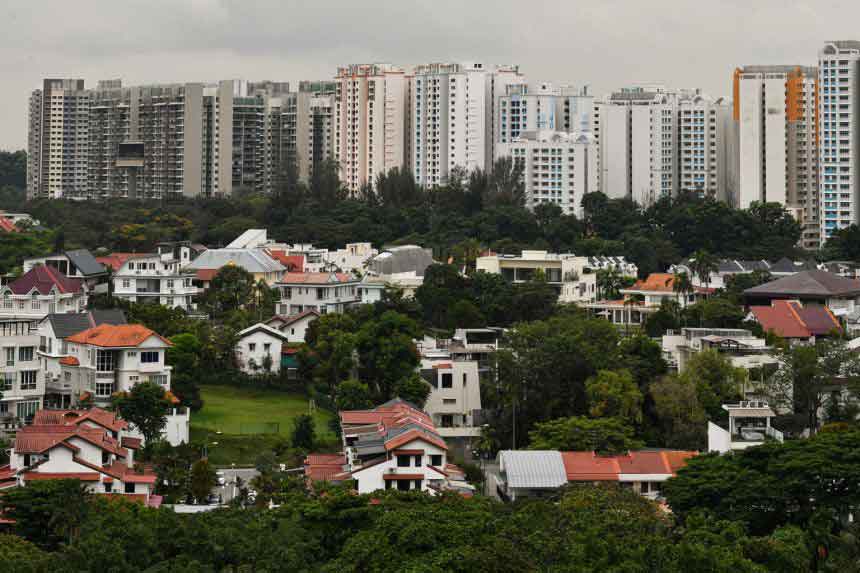 SINGAPORE - The supply of private residential housing from confirmed sites under the government land sales (GLS) programme for the first half of next year has been modestly increased after being sharply reduced in the second half of this year due to the impact of the Covid-19 pandemic.

The private home supply of 1,605 units from four confirmed list sites is 235 units or about 17 per cent more than the 1,370 units from such sites under the second half of the 2020 GLS programme, according to the figures released by the Ministry of National Development (MND) on Thursday (Dec 3).

It is still below the 1,775 units from such sites under the first half of the 2020 GLS programme.

The confirmed list includes one executive condominium (EC) site which can yield about 590 units. The other three sites also offer up 9,200 sq m gross floor area (GFA) of commercial space.

A total number of 7,045 private homes can thus be potentially developed on the confirmed and reserve list sites. This is 5.6 per cent more than the 6,670 units under the GLS programme for the second half of this year.

The land supply was "carefully calibrated to take into account the Covid-19 and macroeconomic situation", said the MND.

"Given the continued uncertainties in economic and labour market conditions, the Government has decided to maintain a moderate supply of private residential units on the confirmed list.

Mr Ong Teck Hui, senior director of research & consultancy at JLL noted that the sites on the confirmed list are expected to yield 1,015 private homes excluding ECs. That’s about 34 per cent more than the 755 units released for the second half of  this year and the first increase in private home supply after five straight cuts in previous GLS confirmed lists.

“In absolute terms, the increase in supply is not significant as the government is still concerned about uncertainties in economic and labour market conditions,” he said.

Despite the calibrated supply, there are still choice sites on offer in both the confirmed and reserve lists to prevent the market from overheating, Mr Desmond Sim, head of research, Southeast Asia, CBRE, noted.

The confirmed list for the first half of 2021 comprises three private residential sites at Lentor Central and Slim Barracks Rise as well as one EC site at Tampines Street 62.

“The increase in residential units introduced will help to provide a much-needed boost for developers to shore up their land inventory, given that supply from previous GLS sites has been relatively limited.

“With healthy demand from new and resale markets, coupled with the declining unsold stock, these sites are likely to attract healthy bidding activity, as evidenced by the tenders of the previous two GLS sites (Tanah Merah Kechil Link and Yishun Ave 9),” Mr Sim noted.

“Of the four sites, three have commercial components, which could boost vibrancy in the new estates. The Slim Barracks Rise sites could be especially appealing to developers, as they are situated near a transport node, surrounded by the one-north biomedical hub,” he said.

The two Slim Barracks Rise sites are located in the one-north technology enclave, within walking distance of Buona Vista and one-north stations. The sites aim to inject more residential spaces in one-north estate, with parcel A generating 265 units and parcel B, 140 units. Both sites are small and could attract many bidders due to their lower total development costs, Mr Ong said.

The Lentor Central parcel is located next to the upcoming Lentor MRT and can yield 610 private homes and 8,000 sqm of commercial space. The Tampines EC site can yield about 590 EC units and could be in fair demand due to moderate supply of new EC projects in the pipeline, he added.

“As many developers will likely be unsuccessful in bidding for the limited number of GLS sites, more are expected to consider sites offered under collective sales as the healthy momentum in private home sales grows,” Mr Ong said.

Mr Ong cited the enbloc sale of the Haig Road properties for $32.8 million for redevelopment and those of adjoining projects Fairhaven and Sophia Ville for $62 million.

“The conservative residential supply under the GLS is likely to revive interest in the collective sales market, but not to the extent of the fervour seen in 2017 and 2018,” he noted.

MND said that there is a good selection of sites with additional supply in the Reserve List that developers can initiate for development if they assess that there is demand.”

As with the second half of this year, no new sites for predominantly commercial or hotel use will be launched for sale in the first half of 2021.

A total of five residential sites, three white sites and one hotel site was carried over to the first half of next year.

But the Singapore private housing market has remained resilient despite the economic downturn. Private home prices edged up 0.1 per cent in the first nine months this year compared with 2.1 per cent growth last year, and minus 5.2 per cent during the global financial crisis. New home sales from project launches were up for five straight months this year, while developers have been actively, if cautiously, bidding for GLS sites.

"The increase in supply is a response to healthy demand in the market," said Mr Lee Sze Teck, research director at property agency Huttons Asia.

"Perhaps, cognisant that the effects of the pandemic may continued to be felt in the next few quarters, the land supply has not been bumped up more," he added.

He also noted signs of more activity in the property market: The number of uncompleted unsold units has declined since the first quarter of 2019 to 26,483 units, the recent GLS tender  saw a large number of bidders and the en-bloc market witnessed two collective sales in the span of two weeks.

MND on Thursday said the Government will continue to monitor economic and property market conditions closely and "adjust the supply of future GLS programmes, as necessary".