The decision to purchase a new or resale home is predicated more on age, affordability, space and choices. The decision matrix boils down largely to one's personal preferences, needs and budget. 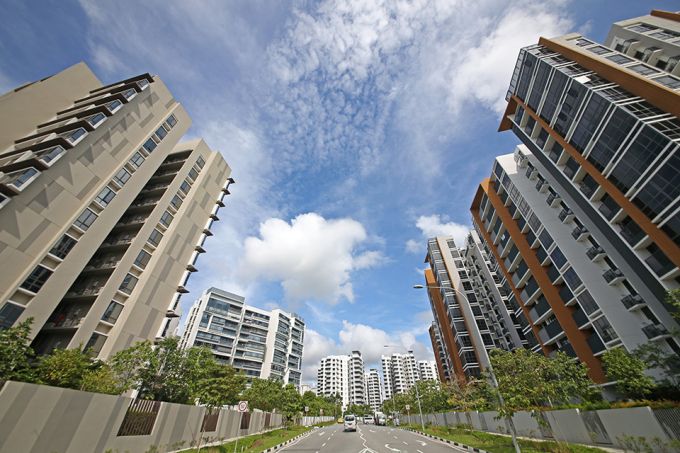 To date, there are around 2,300 apartment and condominium projects completed in Singapore, offering an abundance of choices varying in location, character and tenure

IN Singapore's current property upswing, median prices of private homes in the secondary market have risen across all regions.

The stronger recovery in the city fringe and suburban regions is closely tied to the fact that the last collective-sale boom was concentrated in the suburban market.

The perennial question every property investor asks is: should I invest in a new or resale home?

In this article, we revisit the pros and cons of each property type. Given the active rental market for apartments and condominiums, we also examine the financial performance of new and resale non-landed homes, among other factors such as locality, holding period and property tenure.

A key differentiating feature between new and resale homes is age. New projects often offer modern facilities and curated environments that leverage smart and green technology. Of late, developers have been incorporating digitalised and automated interfaces in place of mechanical ones, such as touch-free lift buttons, home-assistant mobile apps and voice-activated home functions.

Upon completion, new units offer a ready condition for a buyer to move in or rent out, while resale units tend to require some refurbishment. On the other hand, resale units' renovation duration is likely to be shorter than new units' construction period.

For some leasehold resale developments, investors are more likely to experience the effect of lease decay at some point, especially if the unit on hand was completed decades ago. Nonetheless, should owners of an ageing leasehold project band together in a collective sale, the lease decay effect could be offset adequately.

On a per square foot (psf) basis, new-sale units are generally priced at a premium over resale units.

In H1 2021, new units' median price was S$1,841 psf, 40 per cent above the S$1,312 psf for resale units. This suggests that for a given budget, a resale unit offers 40 per cent more living space than a new one. However, new units tend to come with more efficient floor plates and space utilisation, which can make up for their smaller sizes.

By locality, the price gap between new and resale units was the most pronounced in the OCR at 45 per cent, suggesting that the trade-off between space and price will be most keenly felt by buyers considering units there. New units fetched premiums of 41 per cent in the CCR and 32 per cent in the RCR, over their resale counterparts.

One draw of purchasing a new unit from developers is the availability of flexible-payment schemes, which are attractive to buyers who need more time to put their finances in order.

To date, there are around 2,300 apartment and condominium projects completed in Singapore, offering an abundance of choices varying in location, character and tenure.

The range of new projects is more limited, as land parcels are only available through government land sales (GLS) or the en-bloc market. New units on GLS land parcels also tend to be on 99-year leases.

However, buyers considering a new project will have more unit choices at the point of launch, as compared to an older project.

When a new project is completed, investors could face stiff competition in marketing their units for rent. This applies too if there is a sizeable pool of investors looking to offload their purchases upon project completion and the expiry of the seller's stamp duty holding period. Consequently, rents and exit pricing might fall short of initial expectations.

In our analyses of the return characteristics of properties sold in 2019, 2020 and H1 2021, we classified the transactions into units bought from the developer versus those bought in the resale market. The figures should be interpreted against the fact that the market has reached an all-time high in the last 2.5 years.

While resale units appear to be slightly more profitable from a capital gains perspective, this belies the differences across market segments. New projects priced competitively could reap better gains than if one had invested in a resale home.

RCR and OCR units enjoyed stronger capital gains than those in the CCR. This may be due to the aforementioned stronger recovery in the fringe and suburban regions.

The effect of tenure on capital appreciation was mixed. For developer units, a better performance was returned by those of a leasehold tenure, perhaps due to the premium paid for new freehold units. On the other hand, leasehold resale units fared worse than their freehold counterparts as the lease decay effect was more prominent for aged properties. 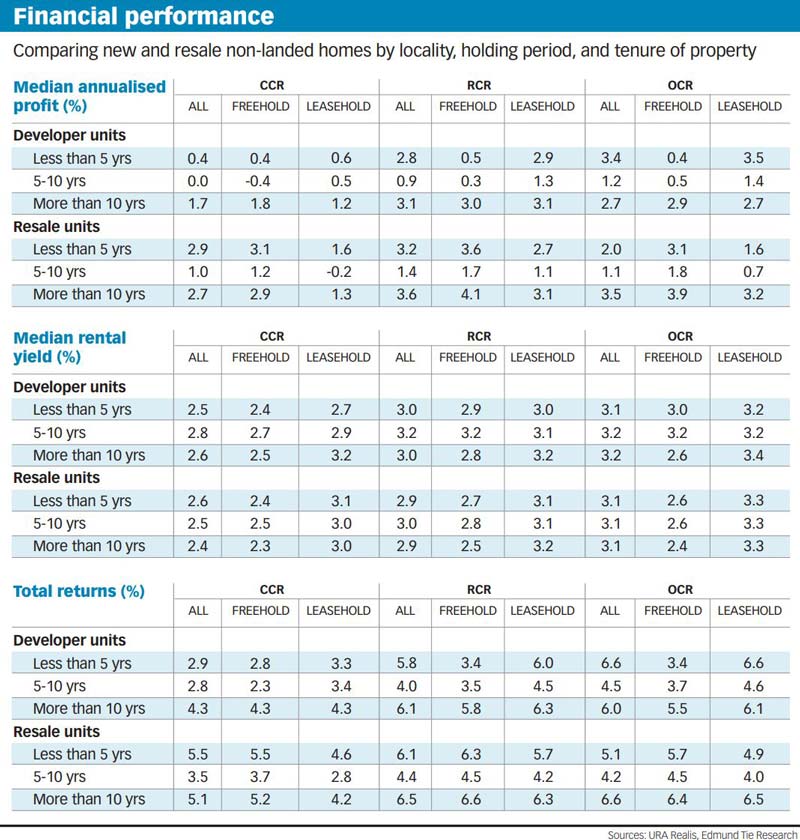 In general, rental yields generated by developer and resale units were fairly equal. It appears the rental yields were not contingent on the property's age. Similarly, there was no clear trend between rental yields and the investment holding period.

However, an investor can generate earlier cash flows with a resale unit than with a new unit, given the absence of a construction phase.

Locality wise, OCR units fetched the highest rental yields, followed by those in the RCR and finally the OCR. Yields tend to be compressed for highly sought-after properties in prime areas.

With minimal exceptions, leasehold units returned better rental yields than their freehold counterparts. In general, the premium paid for freehold units translates to a lower yield, as tenants are agnostic to the property tenure.

Given the property market's stellar performance through the decades, investors could be forgiven for focusing more on capital gain potential.

RCR and OCR units enjoyed higher total returns than those in the CCR, again due to the stronger recovery in the fringe and suburban markets.

While total returns improved with the holding period, the effect was diluted by the consistency of rental yield vis-à-vis holding period.

The effect of tenure was mixed. As rental yields were higher for leasehold properties, the total-return analysis suggested that among new units, leasehold ones tend to outperform their freehold counterparts. However, among resale homes, freehold units maintained a slight edge over leasehold units.

In conclusion, various attributes such as locality, holding period, and tenure have noticeable effects on the financial returns of homes sold in the current cycle.

On the other hand, the distinction between investing in a new or resale home seemed less stark financially.

At the end of the day, the decision to purchase a new or resale home is predicated more on age, affordability, space and choices. The decision matrix boils down largely to one's personal preferences, needs and budget.