HDB upgraders and new wealth from pandemic-driven growth industries such as biotechnology and information technology are driving the revival. 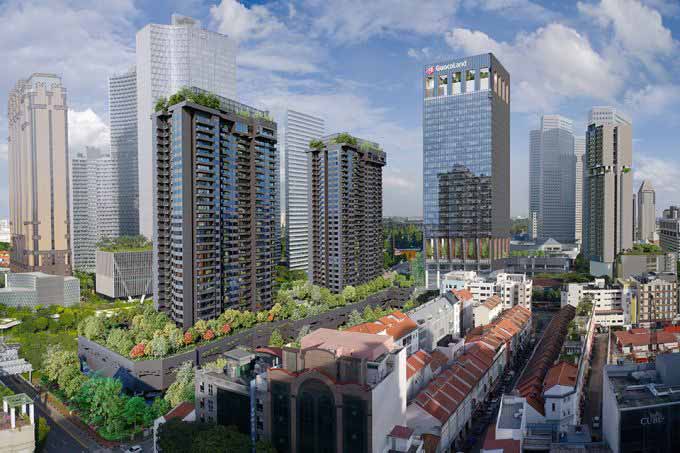 Midtown Modern at Bugis – the project has distanced itself from the pack since its launch, achieving an average of S$2,767 psf. PHOTO: GUOCOLAND

DURING Pasir Ris 8's launch weekend in July, six rounds of price increases were said to have taken place within a single day. About 85 per cent of the units in the project, located in Singapore's eastern region, were snapped up at the launch. The upward price revisions came as sales exceeded expectations.

The romance of Pasir Ris 8 with homebuyers can hardly be considered an isolated case, as other projects launched earlier in the year had established the trend of launch-led demand leading to buoyancy in prices in certain locations.

It appears that whenever a highly-anticipated new project captures the public's and buyers' attention, fresh benchmarks are set for the area.

Do these new price levels in selected new-launch projects have the gravitas to cause a re-rating of condominium prices in their respective localities?

To examine this, we looked at the emerging hotspots that resulted from such new condominium projects and their respective planning areas. We analysed primary sales, specifically in Queenstown, River Valley, Downtown Core, Bukit Merah and Pasir Ris, where this year's popular projects have come to the market.

The exceptional sales at Pasir Ris 8 were the talk of the town, with two of the two-bedroom units selling above the S$2,000 per square foot (psf) mark, at S$2,084 psf.

Given the lack of significant launches in the Outside Central Region (OCR) for several months this year, and the fact that there was hardly any new project in Pasir Ris for some time, demand-fuelled prices at Pasir Ris 8 easily outpaced last year's average prices for new sales.

The 417 units sold at Pasir Ris 8 as at July 31, according to URA Realis data, fetched an average of S$1,611 psf. This pulled up the average new-sale unit price in the Pasir Ris area in January to July this year to S$1,542 psf, about 14 per cent above last year's average.

In Bukit Merah, the average price of S$2,306 psf at The Reef at King's Dock also broke 2020's levels. In addition to its distinctive facilities, the project benefits from being located within the upcoming Greater Southern Waterfront. Developments that ride on the narrative of larger, grander national development plans may see price uplifts, potentially forming the basis for a price re-rating in the planning area.

The same phenomenon occurred in the Downtown Core, where the government's urban planning efforts to rejuvenate the city centre contributed to improving property values. Midtown Modern had distanced itself from the pack since its launch, achieving an average of S$2,767 psf.

This contributed to a 9.7 per cent year-on-year increase in the average new-sale prices in January to July this year to S$2,724 psf for the whole of the planning area. Prices at One Bernam, which launched in May, were also at the upper end of 2020's new-sale average. 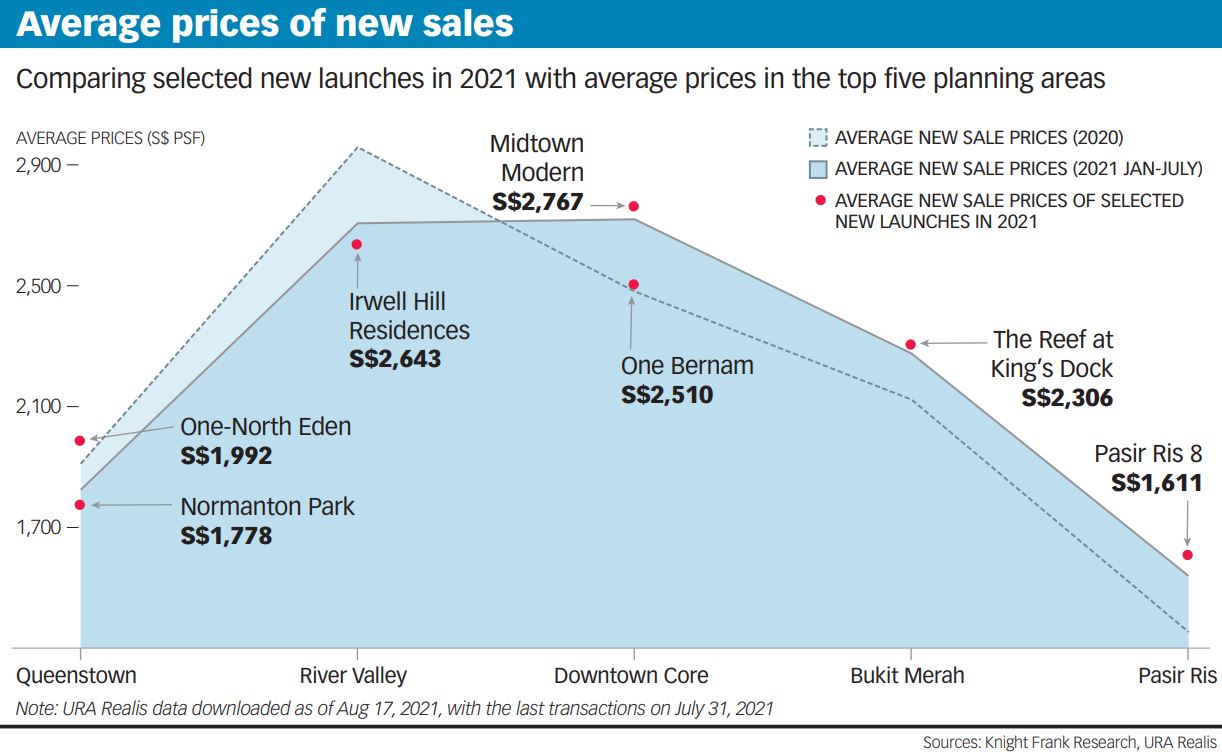 Despite the buzz created by success stories such as Pasir Ris 8, the upward price pull of popular launches does not necessarily lead the average prices within their respective planning areas.

Although Irwell Hill Residences' launch in April drove fast and furious sales at the River Valley planning area, the project came within the ambit of last year's average new-sale prices. As the River Valley planning area comprises many prime residences and exclusive luxury enclaves, other projects were selling at higher prices in both 2020 and 2021.

In Queenstown, the bulk of this year's new sales were attributed to the Normanton Park mega project. While Queenstown's S$1,914 psf average last year was higher than Normanton Park's S$1,778 psf for its 1,039 units sold, both figures were surpassed by One-North Eden, which moved 155 units at S$1,992 psf on average.

However, that was not sufficient to pull up average prices in 2021 thus far to exceed 2020's levels, as the posh Holland area is also part of the Queenstown planning area. One Holland Village Residences launched in 2019 at S$2,686 psf on average, essentially creating its own elevated "price zone" within Queenstown.

Thus, Queenstown's recent launches have yet to outpace the area's average prices in the way that their counterparts in Downtown Core, Bukit Merah and Pasir Ris have done.

In the planning areas surveyed, rising prices stemmed from an interplay of factors such as overall market demand and supply, individual project attributes, interest rates and population affluence.

The characteristics and announcements of growth stories in the planning areas also played a part. In addition, steady demand for homes has depleted the total unsold stock of uncompleted units to 19,384 as at the second quarter of 2021, similar to levels in 2017 during the collective sale bonanza.

Going by some recent government land sales, developers also foresee that this demand will persist. Those that submitted high land bids are anticipating that new benchmark prices can be set at future launches.

If this trend continues and market conditions remain sanguine, unit prices in the respective planning areas may re-rate or adjust as developers re-evaluate their pricing, given their projected higher costs against sustainable demand.

This year, prices have taken the lead from new launches, especially in areas with less activity a year ago. But this does not necessarily mean that new launches will always have the wherewithal to run ahead of its planning area's prices and cause a price re-rating in the locale. Ultimately, the pricing of new launches falls within developers' purview.

Developers will have to navigate the delicate balance between price, product and timing to strike while the iron is hot, and simultaneously maintain a sustainable profit margin and create buy-in from potential owners.

Average new-sale and resale prices in certain planning areas from the first quarter of 2020 to July 2021 show that any increments had remained fairly stable each quarter, despite new launches grabbing headlines. 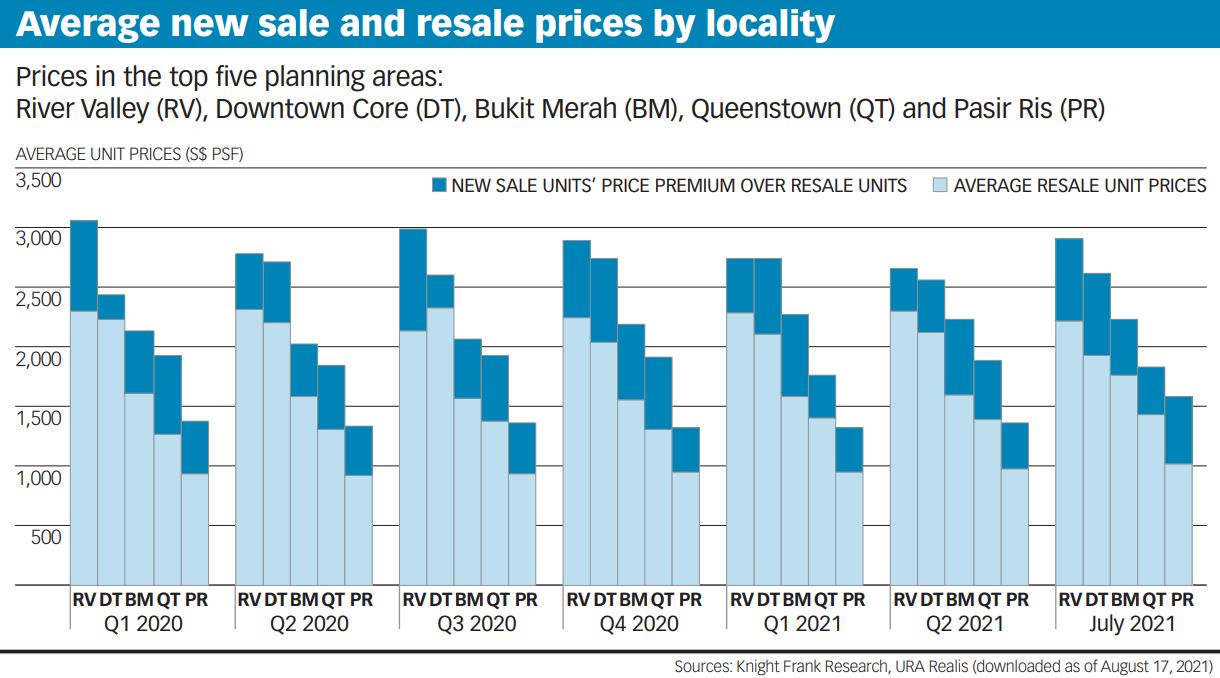 Nonetheless, there are positive signs that the private residential market is in a period of renaissance post-pandemic, girded by genuine buyers comprising HDB upgraders and new wealth from pandemic-driven growth industries such as biotechnology and information technology.

More households have been able to upgrade, thanks to the overall increases in disposable income and earning power in the past decade.

Today's market conditions amid the pandemic could have also prompted more individuals and families to make major life decisions such as home purchases more quickly. In normal circumstances, would-be homebuyers might have been happy to watch and wait.