After being delayed twice, Stage 2 of the Thomson-East Coast Line will begin operations on Aug 28, Minister for Transport S Iswaran announced on Wednesday (Jun 30).

This comes after the Land Transport Authority (LTA) announced in April that it had handed over the six stations that make up the 13km stretch - Springleaf, Lentor, Mayflower, Bright Hill, Upper Thomson and Caldecott - to train operator SMRT.

The LTA said at the time that civil and structural works for the six stations had been completed, with some architectural, electrical and mechanical works still ongoing. 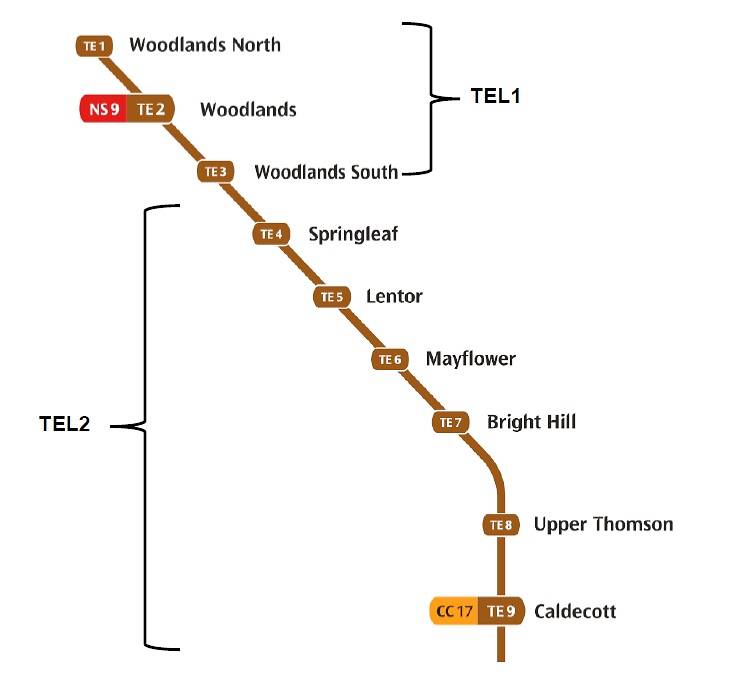 Originally scheduled to be operational by the end of 2020, the opening of Stage 2 of the Thomson-East Coast Line was postponed to the end of the first quarter of this year due to delays caused by the COVID-19 pandemic.

Subsequently, a five-hour disruption of the line in December last year due to a signalling fault prompted the LTA to conduct a system review, delaying the opening to the third quarter of 2021.

Speaking during a visit to Caldecott station on the line, which will serve as an interchange with the Circle Line, Mr Iswaran said the Thomson-East Coast Line exemplifies the goal of making Singapore’s public transport network “inclusive, user-friendly, and accessible to all commuters”.

“Lighting will also be installed into the handrails of staircases, to enhance the visibility of the steps,” he said.

In addition, Thomson-East Coast Line’s platform seats will have backrests and handrails to benefit senior citizens and commuters with mobility difficulties, he added.

“More households will now be nearer to an MRT station,” he said, adding that with the first two stages open, the Thomson-East Coast Line will benefit about 100,000 households.

Mr Iswaran also noted the construction of the Thomson-East Coast Line had been made more challenging by the COVID-19 pandemic.

“The opening of (Stage 2 of the Thomson-East Coast Line) would not have been possible without the hard work, adaptability and personal sacrifices of our technicians, engineers and ground staff,” he said.

“I would also like to thank our frontline land transport workers all over Singapore, who have kept our world moving amidst COVID-19."

He added: "The staff members have had to accept and adapt to fortnightly swab tests, changing their everyday routines with staggered working hours, working in split teams, and segregations in travel modes, meals and break times."

Minister of State for Education and Manpower Gan Siow Huang, who is the Member of Parliament for Marymount, said she hoped the future Upper Thomson MRT station would help reduce traffic congestion in the area.

"The shopkeepers and the store owners there are indeed looking forward to better business with better connectivity and more people taking the MRT to Upper Thomson station," she said.

Singapore’s sixth MRT line, the Thomson-East Coast Line is operated by SMRT, which won a S$1.7 billion contract to operate the line in 2017.

The entire 43km line - which will stretch from Woodlands to Sungei Bedok - was initially due to be fully operational in 2024, with an expected initial 500,000 daily commuters daily rising to about 1 million commuters in the longer term.

However, late last year the LTA said it expected completion delays of up to a year on various construction projects - including the TEL - resulting from the suspension of construction work during Singapore’s “circuit breaker” period.

Disruptions to the global supply chain for construction materials and a manpower crunch due to border closures resulting from the COVID-19 pandemic, also contributed to the delays.