Early in 2009, a S$500 million collective sale of Horizon Towers fell through after a dispute among the owners.

It then went on the market in July 2018 at a reserve price of S$1.1 billion, just before the Jul 6 cooling measures kicked in that year. The tender closed without any bids in September 2018. It then went on to relaunch for sale in early 2019 at the same price, but was unsuccessful.

Now into its 4th attempt in Sep 2022, Horizon Towers is eyeing a collective sale at the same price of $1.1 billion.

The 211-unit development can potentially  yield approximately 560 units at an average size of 1,200 sq ft.

Within walking distance to the Orchard Shopping Belt
150m to Great World MRT
Capable of redevelopment into 560 units at an average size of 1,200 sqft
Pending Enbloc 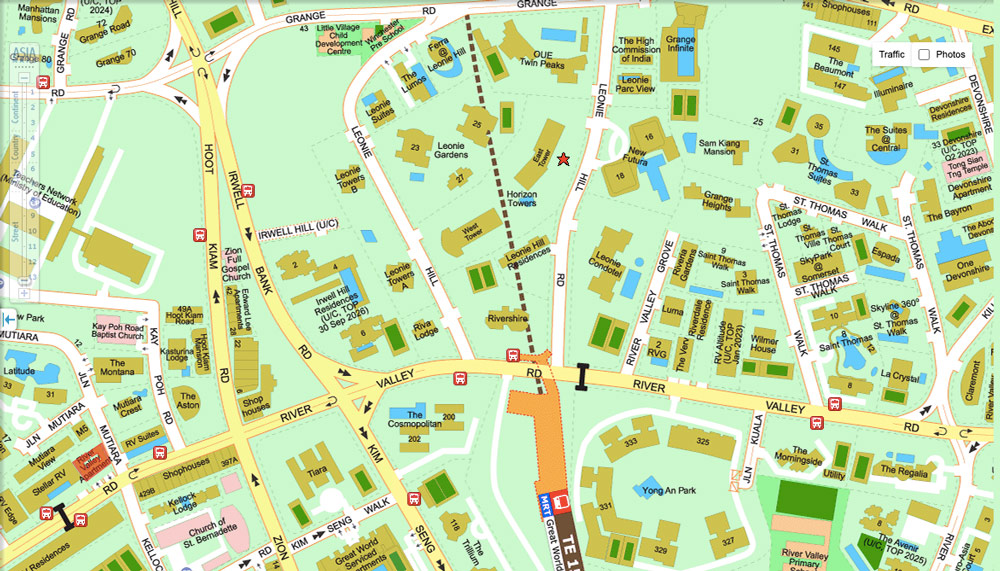 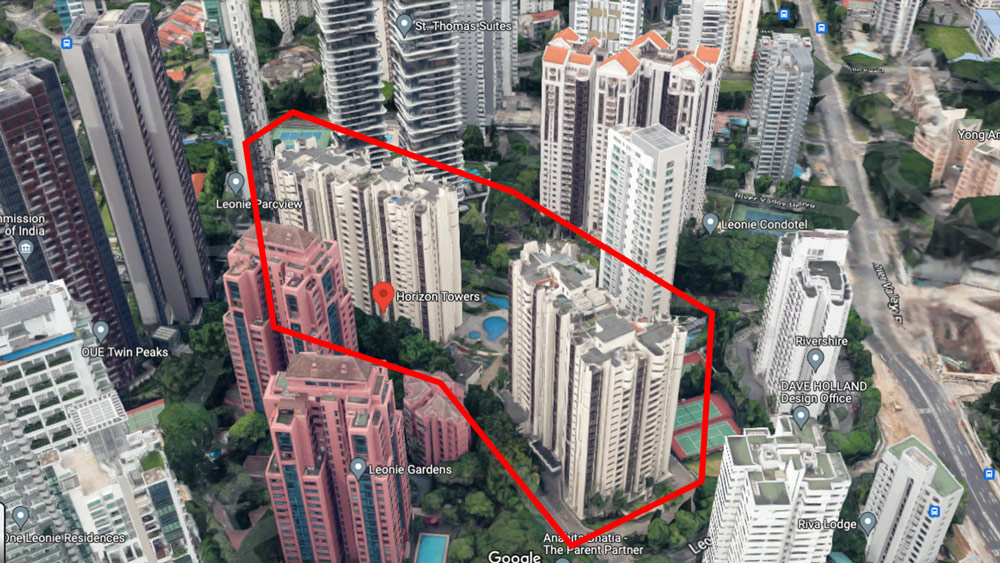 Horizon Towers takes another crack at collective sale at S$1.1b

HORIZON Towers, sitting on a 1.9 hectare site with a 99-year lease in prime district 9, is on the market again at a reserve price of S$1.1 billion.

Inclusive of an estimated S$277 million lease top-up premium, the unit land rate for the collective sale works out to about S$2,049 per square foot per plot ratio (psf ppr) for the 204,742 sq ft site, according to sole marketing agent JLL. Factoring in the 10 per cent bonus gross floor area due to a high development baseline, the unit land rate is S$1,862 psf ppr. There is no land betterment charge - or development charge - payable for the intensification of the site.

The 211-unit development, which sits on 1.9 ha of land, has double road access, with frontages within Leonie Hill and Leonie Hill Road. The site is zoned residential in the 2019 Master Plan with an allowable height of up to 36 stories, and has an “as-built” gross plot ratio (GPR) of around 3.28.

Horizon Towers is within walking distance to shopping belt Orchard Road, while to the south, Great World MRT Station on the upcoming Thomson-East Coast Line is 150 metres by foot.

OWNERS at Horizon Towers seem to have made nailing an en bloc deal a new year's resolution, as they relaunched their collective sale tender on Wednesday at the same S$1.1 billion reserve price as before.

The 211-unit Leonie Hill development's first tender closed in September without a single bid. That tender had first launched in July. Its closing date was then extended by over a month because of cooling measures to the private housing market that came into effect just days after the tender period began.

This time, the tender will last around a month and will close on Jan 28 at 3pm.

According to a BT report in September, Horizon Towers owners have until May 21 to conclude a sale contract and apply to the Strata Titles Board for a sale order, and two to three months are needed by lawyers to make an application to the board.

THE tender for Horizon Towers - the first major en bloc exercise to close after July's property cooling measures - ended on Wednesday without a single bid.

While strong interest was not expected given the tough measures introduced on July 6, the absence of any bids from developers added to the disquiet in the en bloc market, especially big estates eyeing billion-dollar tabs.

Horizon Towers' marketing agent JLL confirmed to The Business Times that no bid came in when the tender period ended on Sept 12, which was extended from the original Aug 7 closing date. Owners of the Leonie Hill Road site, which has a S$1.1 billion reserve price, now have 10 weeks to seal a deal by private treaty.

The 99-year leasehold project, which sits on a 1.9ha plot, launched its tender on July 5. That very night, the Government announced a fresh round of preemptive cooling measures for the housing market that took effect the following day.

HORIZON Towers has extended its collective sale tender closing date by more than a month, following cooling measures that took effect the day after the site had launched for sale on July 5 with a S$1.1 billion reserve price.

The collective sale committee, in consultation with marketing agent JLL and lawyers Lee & Lee, decided to extend the deadline in light of those changes, which include an increase in the rates of the additional buyer’s stamp duty (ABSD), a tightening of mortgage loan-to-value limits across the board and a non-remissible ABSD of 5 per cent for residential land purchases, JLL said in a Tuesday morning statement.

"The decision was made following feedback from developers that they remain interested in the prime site, but would now require more time to observe and re-assess the market going forward, re-evaluate the project in the light of these new measures and monitor the sales of new projects," it added.

BACK in 2009, Horizon Towers was collectively sold for S$500 million but the sale was overturned. Now the prime District 9 condominium has been launched for sale at a reserve price of S$1.1 billion.

Built in the late 1970s, the 99-year leasehold development comprises 211 units in two towers located on an elevated site with double road accesses. The 1.9 hectare site is zoned “Residential” in the 2014 Master Plan with an allowable height of up to 36 storeys.

Tan Hong Boon, regional director of capital markets at JLL, said: “The property has all the ingredients needed for a branded residences with unparalleled services, comfort and convenience.”