Analysts say it is conservative, measured tack given uncertainties amid pandemic

The supply of private homes from confirmed sites under the Government Land Sales (GLS) programme for the second half of this year has been raised by 24.6 per cent to 2,000 units, from 1,605 units for the first half of the year, in response to land-hungry developers and the dwindling unsold new home supply.

While this marks the second increase in the private home supply after five consecutive reductions in previous GLS confirmed lists, analysts called it a conservative and measured programme given the macro-economic uncertainties amid the pandemic.

It is a far cry, for instance, from the 7,000 to 8,000 units that the Government released in the second half of 2010 and 2012 to satisfy the rebound in demand for private housing after the global financial crisis, Cushman & Wakefield said.

"On balance, the Government has decided to moderately increase the supply of private housing on the confirmed list," the Ministry of National Development (MND) said yesterday.

MND had raised the private housing supply from confirmed sites in the first half of this year by 17 per cent, after cutting it by 23 per cent to 1,370 units in the second half of last year as a result of Covid-19.

Nonetheless, Mr Ong Teck Hui, senior director of research and consultancy at JLL, said the phase two (heightened alert) measures to stem the spread of Covid-19 following the emergence of several infection clusters "show that the economy and residential market can be disrupted. This will have an impact on transaction volumes and possibly prices".

Citing URA Realis data, he pointed to a 30 per cent drop in new private home sales last month from April.

Supply from sites on the reserve list can add another 4,860 private home units, bringing the total potential supply to 6,860 units.

The reserve list comprises six private residential sites (including one EC site), two white sites that allow a range of uses, and one hotel site. 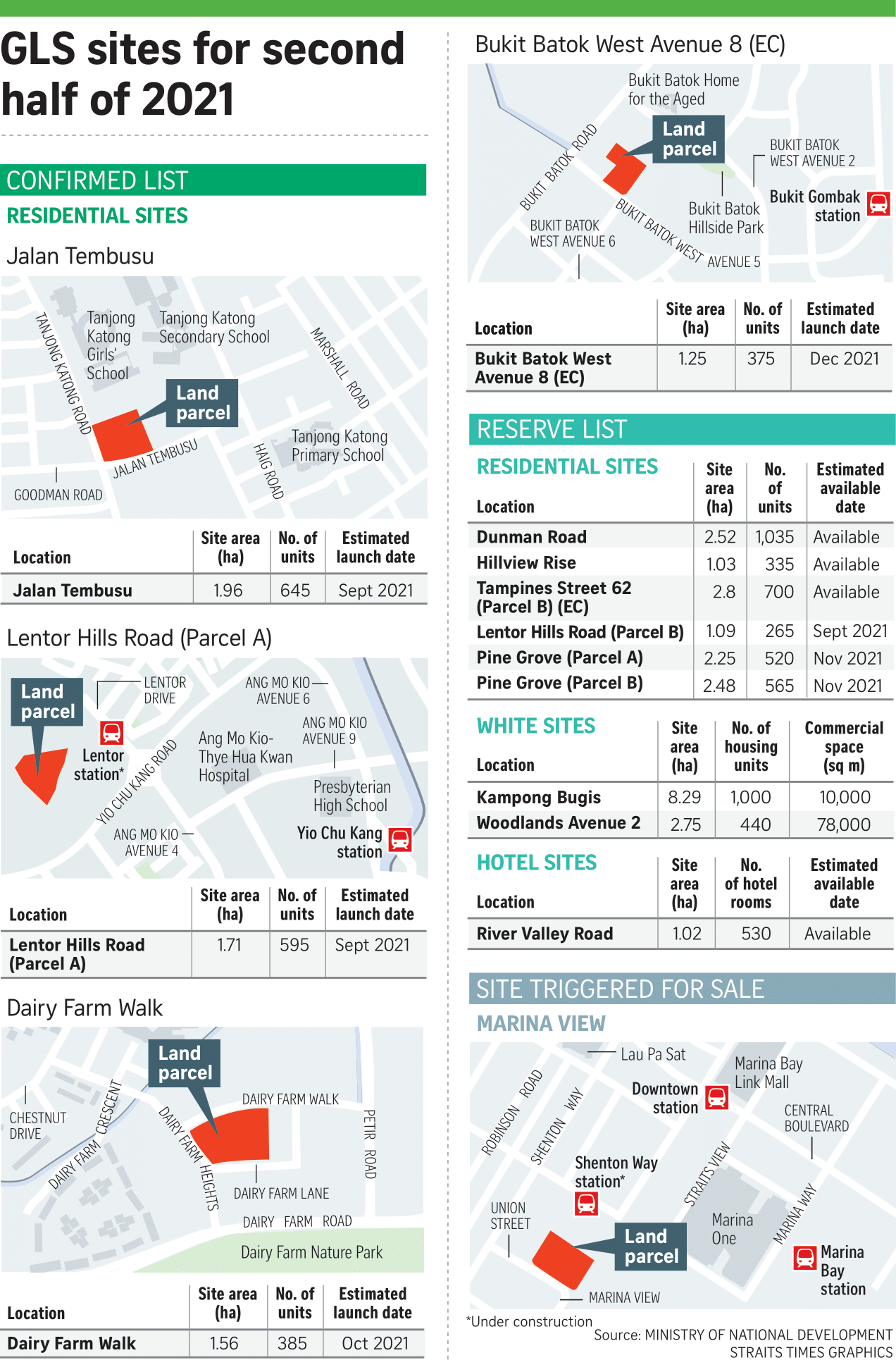 "The Government is erring on the side of caution and leaving most of the units in the reserve list," said Mr Wong Xian Yang, head of research, Singapore, at Cushman & Wakefield.

Ms Catherine He, director of research, South-east Asia, at CBRE, said these sites are likely to attract keen bidding, given the recent robust tender closings for a GLS site in Ang Mo Kio Avenue 1, and an EC site in Tengah Garden Walk.

The move to offer more sites in the suburbs may help to stave off a potential supply crunch in this sub-market, providing buyers - many of whom may be upgrading from Housing Board flats - with a wider selection of homes, said PropNex chief executive Ismail Gafoor.

Ms He said: "Together with a site at Lentor Central, which is currently open for tender, the Lentor Hills Road site seeks to revitalise the area, with new parks and commercial amenities planned."

The Lentor Hills Road site, which can yield 595 units, is near the upcoming Lentor MRT station and amenities in Ang Mo Kio town.

Mr Nicholas Mak, head of research and consultancy at ERA Realty, expects strong "double-digit" bids in the upcoming tenders for the sites in Jalan Tembusu and Lentor Hills Road.

Mr Ong said the Bukit Batok West EC site, which can yield 375 units, will attract good interest given the moderate supply of new EC projects in the west.