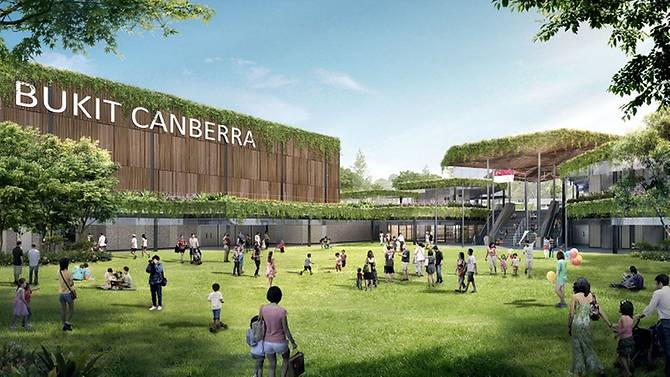 The upcoming Sembawang sport and community hub set to open progressively from 2020 will be called Bukit Canberra, announced Sport Singapore on Sunday (Jul 1) at the groundbreaking ceremony.

The 12 hectare space – first announced in 2016 – will provide amenities such as a hawker centre, indoor and outdoor sport facilities, a polyclinic, a senior care centre, green spaces for community farming and lifestyle related amenities for the community. It is located about five minutes from Sembawang MRT station.

Bukit Canberra will also see the largest ActiveSG gym with indoor and outdoor pools. There will also be 3km of running trails as well as a fruit orchard and healthcare options such as a polyclinic and senior care centre.

And to help visitors learn more about the area’s past, heritage story boards will be set up around Bukit Canberra detailing the area as a former naval base, and its historic structures including the Former Admiralty House that used to accommodate key military commanders based in Singapore.

Speaking at a family carnival to mark the start of construction works, Minister for Education and Adviser to Sembawang GRC Grassroots Organisations Ong Ye Kung said the project is one that residents have been waiting for, for a long time.

“Bukit Canberra is both a historical treasure and the brainchild of our residents. We have been engaging Sembawang residents since 2016 to co-create a vibrant gathering place for our residents and families.

“The general consensus was to conserve the greenery as much as possible, and at the same time put in place useful facilities that the community finds most useful,” he said.

At the event, the Grassroots Advisers also planted a Sembawang Tree, which will be part of the 1,600 additional trees that will be planted at Bukit Canberra.

Bukit Canberra will have facilities by Sport Singapore, Ministry of Health, National Healthcare Group Polyclinics, National Environment Agency, National Parks Board and have inputs from the National Heritage Board.

Certain parts of the hub such as the hawker centre and swimming pool were originally set to open later this year but had to be pushed back to develop the project fully, advisors noted.

The development is expected to be fully operational by September 2021.