Second-time buyers who were unable to purchase an apartment unit during the initial launch snapped up the remaining 146 units of the 639-unit development on Saturday (Nov 26), after sales bookings opened for them that morning.

SOME 73 per cent of apartment units at Copen Grand, the first executive condominium (EC) at the upcoming Tengah Town, were sold on the first day of its launch, its developers said on Sunday (Oct 23).

Eligible buyers on Saturday bought 465 units at the development, which had an average launch price of S$1,300 per square foot (psf), with an additional 3 per cent applied to units sold under the deferred payment scheme, according to a joint statement by City Developments Limited (CDL) and MCL Land.

Balance units chart as at 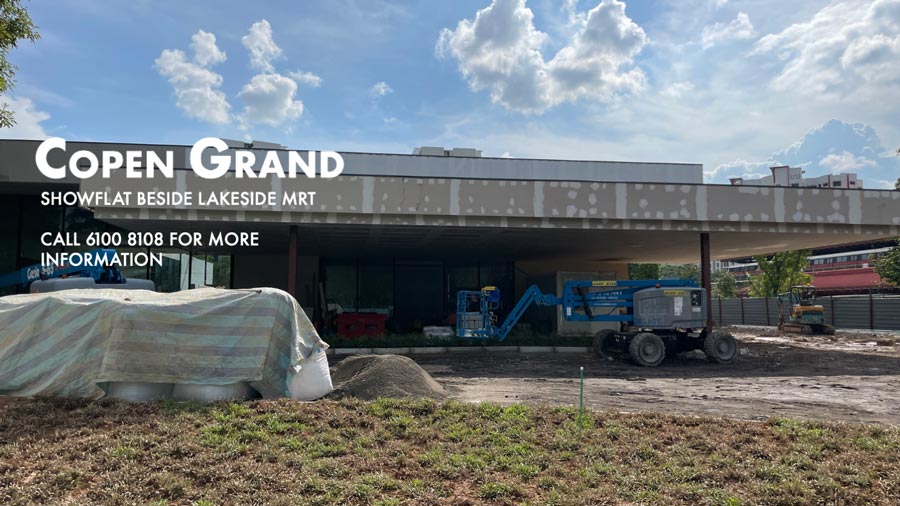 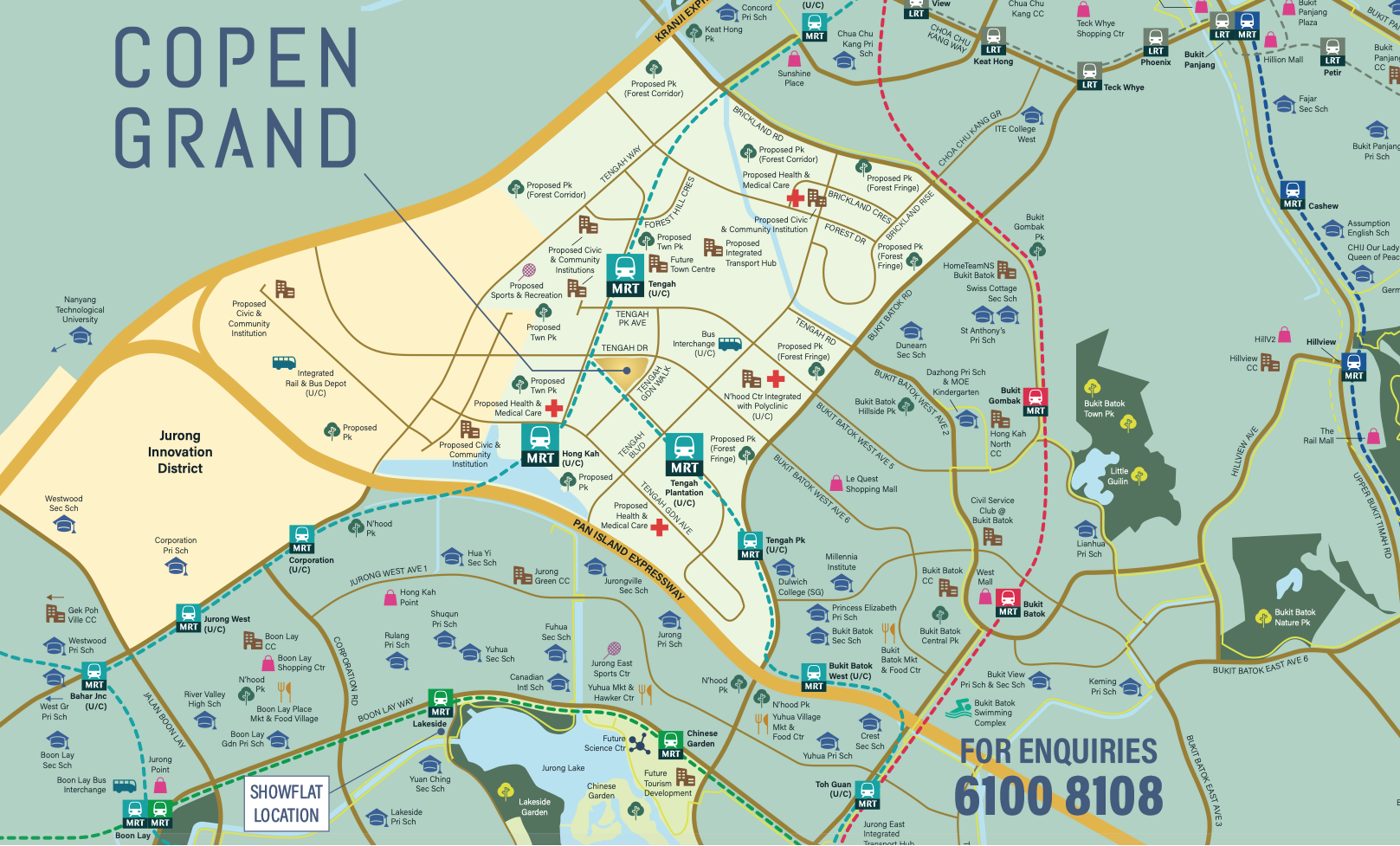 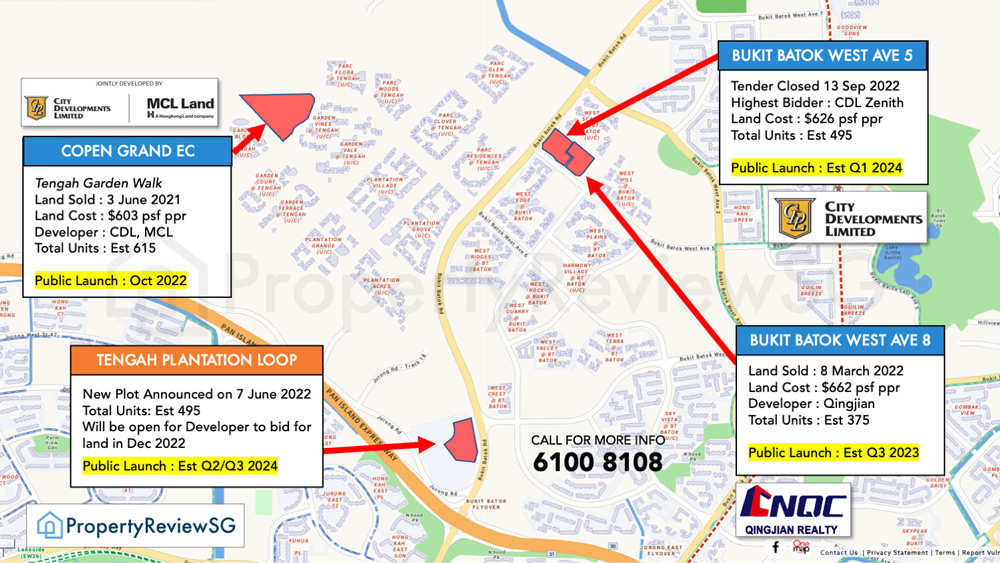 There will be several EC launches within the same area, read more about:

Tengah Garden Walk EC (Project Name : Copen Grand) will be the very first EC in Tengah, the next key area of focus for residential development.

Tengah occupies a massive land area, and is expected to house 42,000 new homes across 5 residential districts.

It will be designed as a Smart and Sustainable Town, with smart energy management and ready provision for electric vehicles. 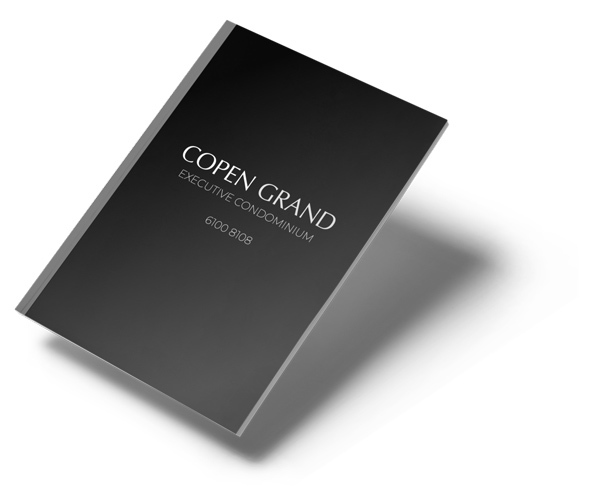 4 June 2021 First EC site in Tengah awarded for $400.32 million in new record , Straits Times
"This translates to $603 per square foot per plot ratio (psf ppr) for the 99-year leasehold site - a record land rate for an EC site under the government land sales (GLS) programme.

The bid smashed the previous record of $583 psf ppr garnered by the Sumang Walk EC site in Punggol, which was awarded in March 2018.

It is also higher than the $576 psf ppr achieved for the EC site in Yishun Avenue 9 that was awarded last November." 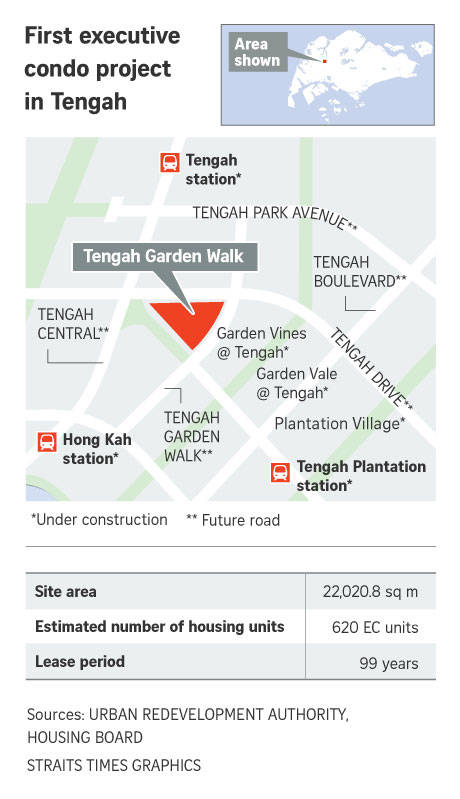 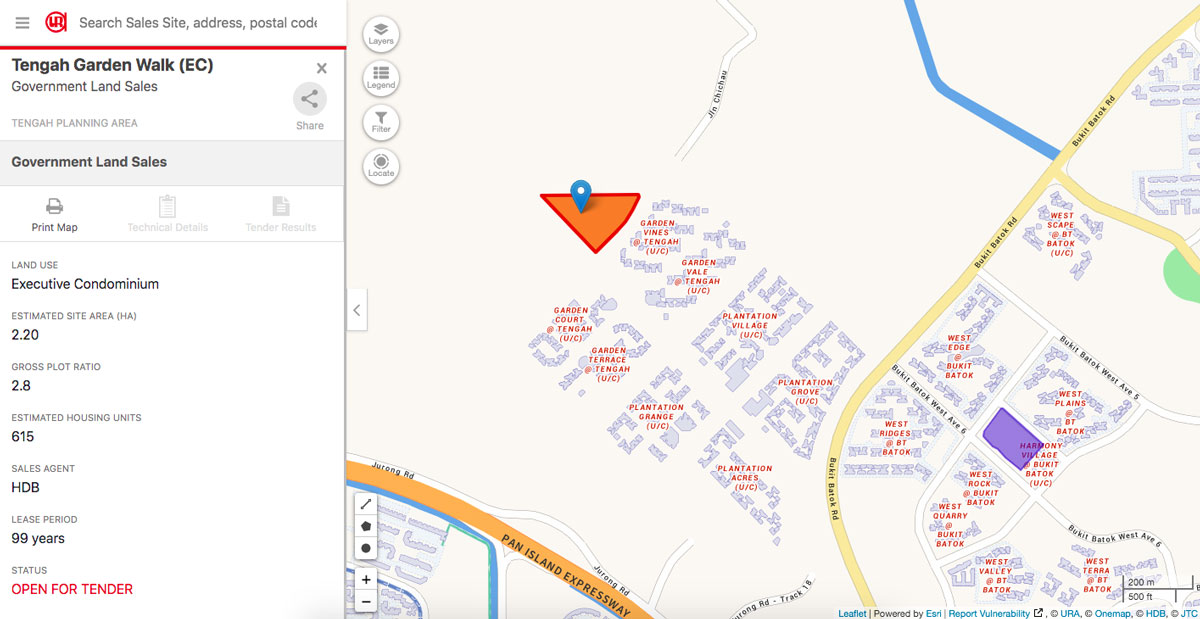 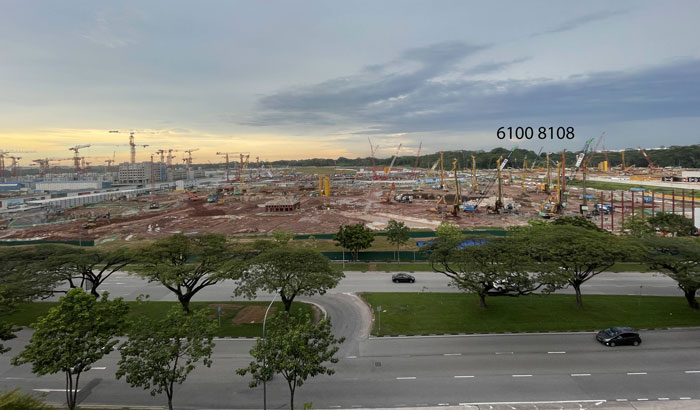 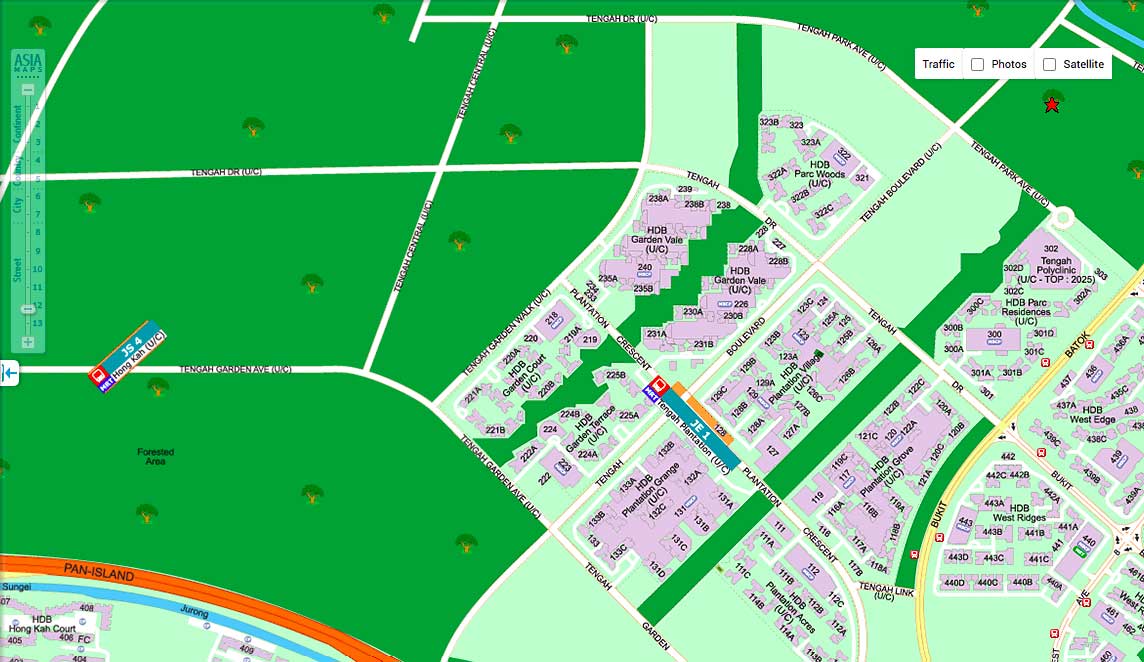 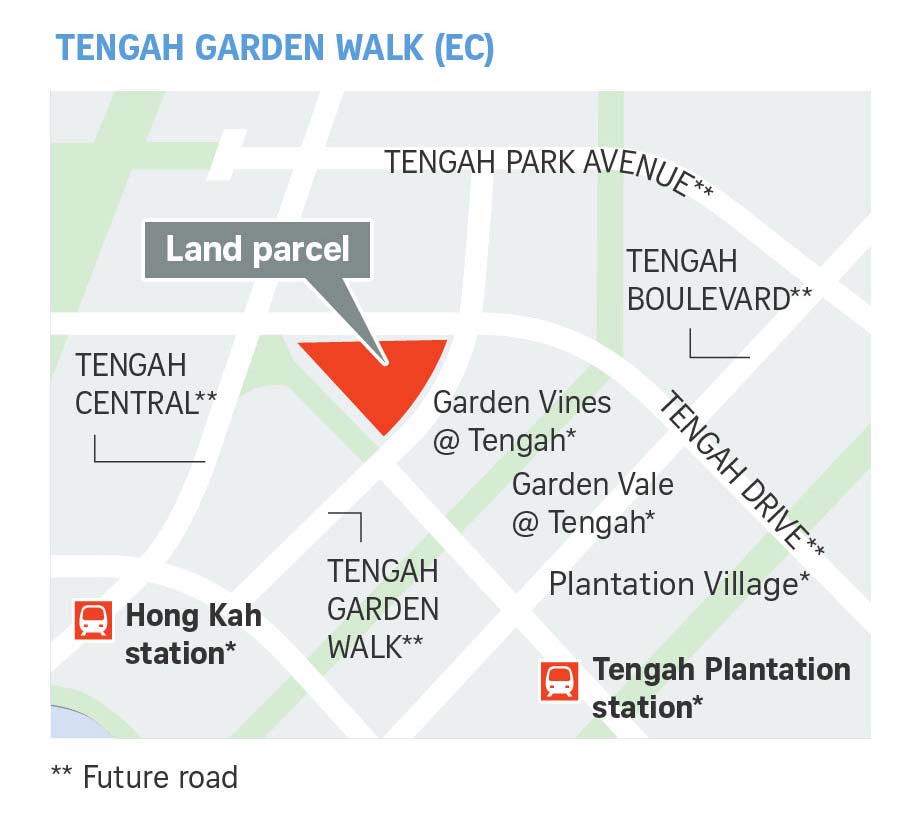 Tengah will be Singapore’s first smart and sustainable town, with green features and smart technologies. The development of Tengah will provide new homes and workspaces in the Western region of Singapore, and complement other developments in Tengah, Jurong Innovation District, and Jurong Lake District.

Tengah’s plans will capitalise on Tengah’s unique identity and offer residents new living and recreational opportunities. The key features of Tengah will revolve around nature and the community, to create an endearing town where future residents can experience being “At Home with Nature”. 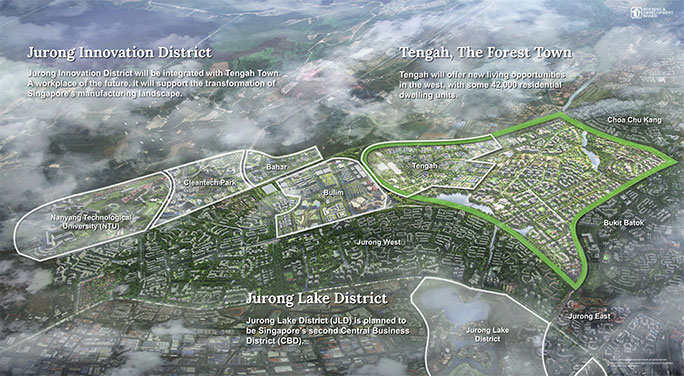 Tengah is expected to house about 42,000 new homes across 5 residential districts, each designed according to their unique character.

Looking to the future, the development of Tengah will revolve around nature and the community; one where residents can experience being “At Home with Nature”. This includes: 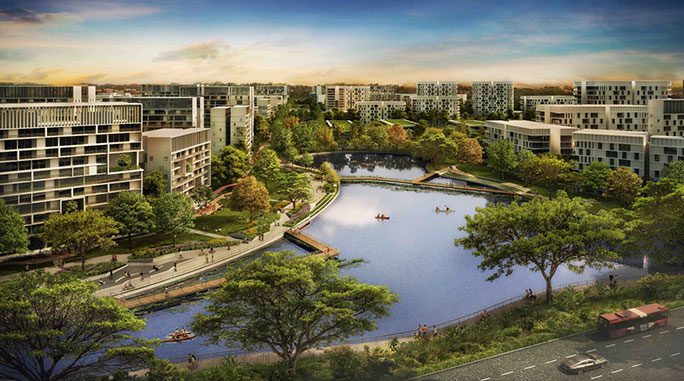 (1) Plantation District will be the home of community farming, with a Community Farmway running through the precincts. There will be opportunities for facilities and activities such as farmers’ markets and “farm-to-table” dining. 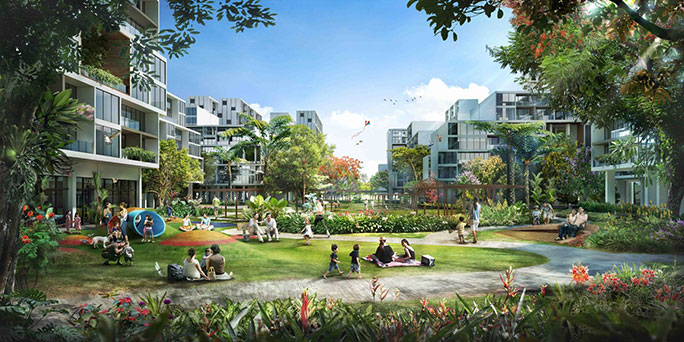 (2) Garden District is framed by Tengah Pond and Central Park. This will be a unique urban sanctuary that is complemented by a garden-themed farmway that encourages communal activities and active-living. 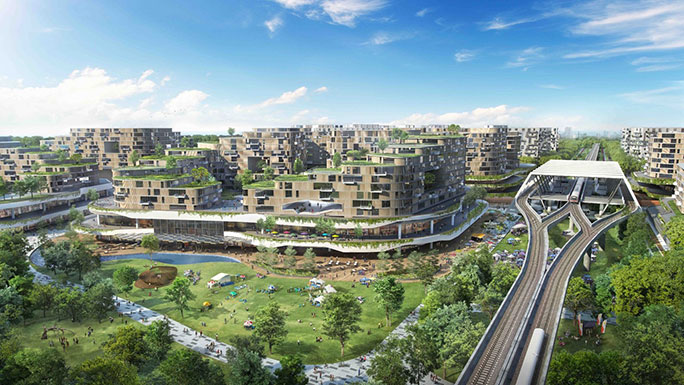 (3) Park District will be the hub and heart of Tengah. It will be home to the first “car-free” town centre in Singapore. The district will be surrounded by lush landscaping and the Forest Corridor.

(4) The Brickland District reminisces Tengah’s industrial past in producing bricks. It will offer unobstructed views of the surrounding greenery. 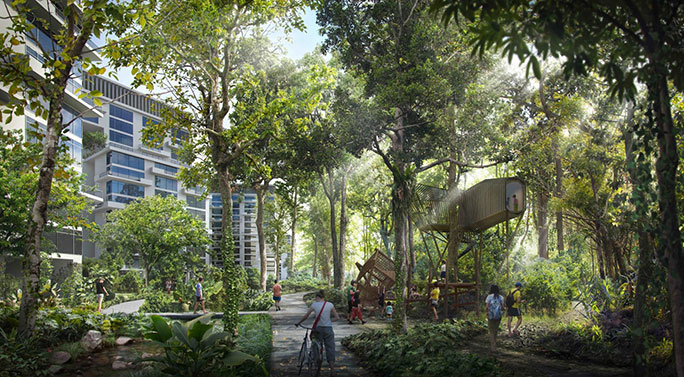 The Forest Hill District is designed based on the concept of “living amidst nature”, and brings nature right to your doorstep

We developed the Biophilic Town Framework to promote a greater sense of place, better health and well-being, and enhance the quality of life for our residents. The framework also guides the development of Tengah town to create nature-centric neighbourhoods in a holistic manner, so that residents can better connect with nature and enjoy its intrinsic benefits. 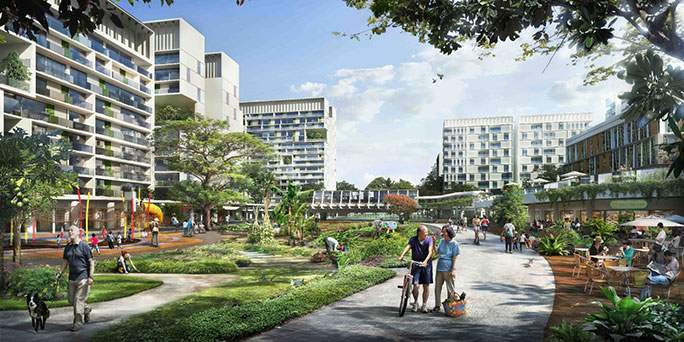 Provisions for walking and cycling everywhere

Tengah residents can look forward to convenient modes of transport within and around the town. They can access neighbouring towns or the city through the planned Jurong Region Line, or buses. Majority of Tengah residents will live within walking distance to an MRT station. 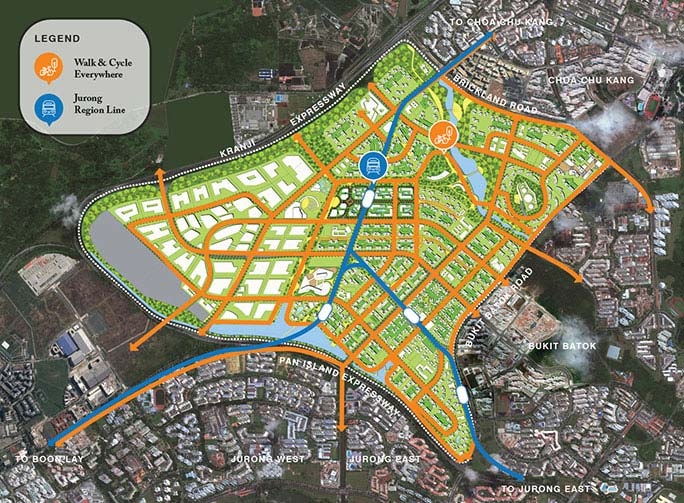 Provisions for moving around with ease

To support Singapore’s movement towards a car-lite and people-friendly environment, Tengah will have Singapore’s first “car-free” HDB town centre. The roads will run beneath the town centre, freeing up spaces at ground level. With this separation of pedestrian roads from motor traffic, the heart of the town centre will be safe and friendly for walking, cycling, as well as for recreational activities. 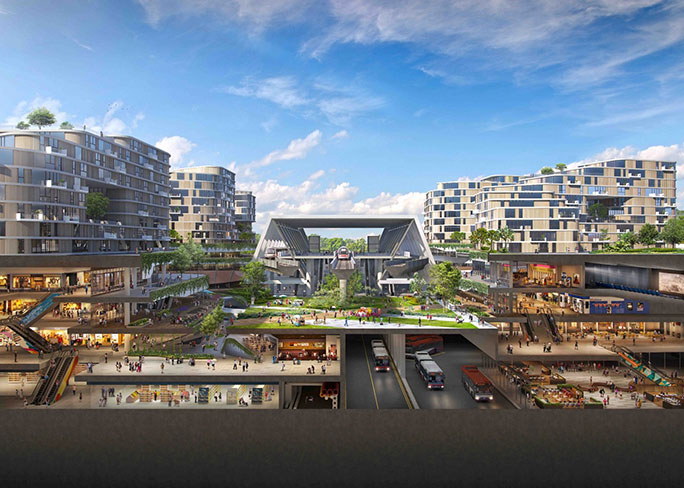 Tengah will offer comprehensive facilities at the town, district, and precinct levels for convenience, such as medical facilities, a town center, sports hub, and an integrated community hub. There will also be new-generation HDB neighbourhood centres that offer a wide range of facilities and connectivity to transport nodes and other communal facilities to meet the residents’ daily needs.

Creating a smart and sustainable town

While preserving the natural forest nature of Tengah, we will also put in place infrastructure to ensure that Tengah is well equipped to meet the technological needs of a Smart and Sustainable Town. 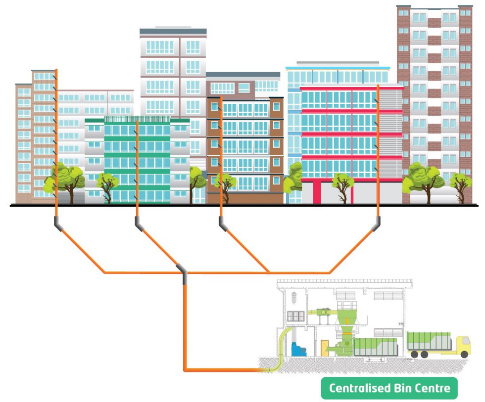 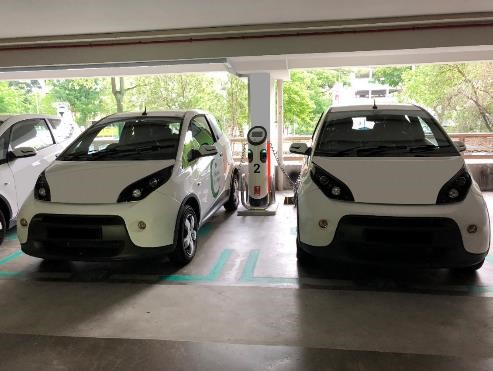